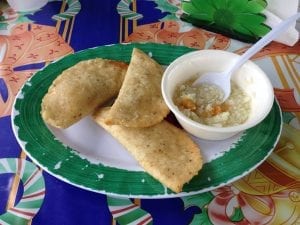 Panades were introduced to Belize by the Mayan culture and known in Spanish as Empanadas. Panades are made with corn dough stuffed with fish, these are deep fried in oil until they turn golden brown. They are served with an onion, pepper and cabbage sauce. Regarded as a specialty of Belize, a country that has some of the best fresh fish in the world. There are no McDonalds, Burger Kings, or any other western fast food outlets in Belize. Some would say that is a blessing since it is a far tastier (and cheaper) fast food.

Waffles date back to the Middle Ages, sold on the streets in Belgium. They were introduced to the U.S.A in 1964 and rebranded from Brussels to Belgian Waffles as U.S. citizens were not heard of Brussels. The waffles sold by vendors in Belgium don’t have much in common with the U.S. version though. In Belgium they come without toppings and eaten by hand. There are two distinct types of waffle in Belgium. The Liege waffle is thicker and generally oval shaped and the Brussels waffle is more crispy and rectangular. The sweetness is cooked into the waffle so there is no need for syrup or cream. While some are dusted with sugar this is for appearance as much as anything.

Made from corn dough known as masa, stuffed with meat. The tamales steamed inside of a corn husk or banana leaf. Mexican Grandmothers make the best Tamales and will spend up to 3 days preparing and cooking them to ensure premium taste. Best served with salsa. A traditional street food which you can buy anywhere in Mexico, like a many others on this list Tamales have also made the transition from street food to restaurant cuisine.